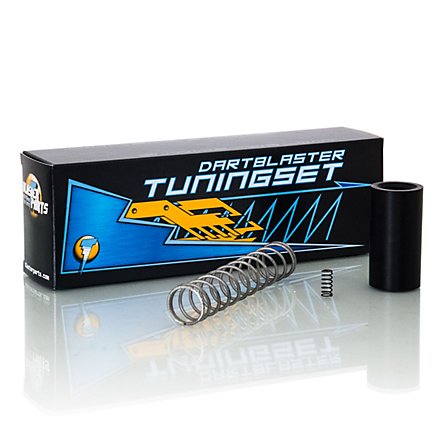 If you want to improve the firing range of the Recon MKII, simply grab the Modification Spring and you’re fine. More sophisticated Nerf Warriors or people who use their Nerf excessively might focus on the reliability of the blaster as well and choose the Blasterparts Modification Kit for the Nerf N-Strike Elite XD Modulus Recon MKII. This kit aims at increasing the shooting distance of the Recon MKII as well as obtaining the reliability that we expect from a Nerf gun

To install the Blasterparts Modification Kit into the Nerf N-Strike Elite XD Modulus Recon MarkII, the blaster has to be opened entirely. After the main spring has been exchanged, address the catch spring next. The catch is a rectangular plastic frame located directly behind the main spring. The little spring that sits on its edge is the one to be switched out with the little spring from the kit. Some modders do combine both catch springs by screwing them into each other and use this combo spring for the catch. This method won’t harm the blaster in any way and can be done without regard. The Guiding Shell is to be inserted into the stock adapter so that the side with the angled edges faces the blaster. The Guiding Shell is needed to guide the plunger, keep it stable and prevent it from tilting or jamming.

The blaster can now be reassembled. You should keep an eye on the position of the sled and the mag release sliders.

Even if the blasters Recon CS-6, Retaliator and Recon MKII resemble each other visually, they are very different regarding their internals. The Blasterparts Tuning-Set Tactical Range for the Nerf N-Strike Elite XD Modulus Recon MKII does only fit into this specified model.