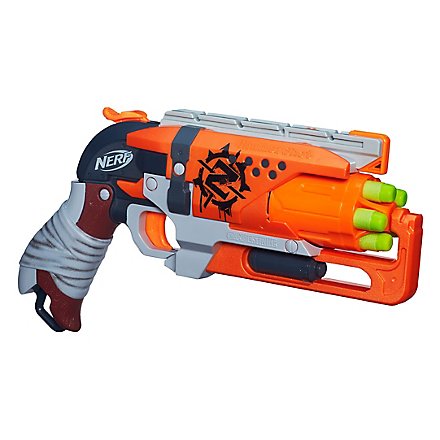 The popular revolver blaster with one-handed operation in a new packaging!

The Nerf Zombie Strike Hammershot belongs to the absolute blaster evergreens and hopefully will stay with us for a long time. As a reward for special services, Hasbro granted the Hammershot a new packaging which comes up with an even brighter comic look. In particular, the back, on which zombie hunters in action are shown makes even more desire to get started with the revolver blaster.

No change: Still stylish and super-effective

In addition to its use in the fight against undead hordes, the Hammershot is also a very effective blaster for office wars, nerf battles and, of course, Larp use. It offers 5 darts without reloading in a rather compact design and can be used as a secondary blaster, but also as a main blaster.

Thanks to the hammer mechanism, a one-handed operation is possible and you can use two Sammershots simultaneously. This gives you the interesting advantage of being able to shoot in two directions at the same time. Smaller children will probably need to use the Hammershot with both hands, though.

The design of the new Hammershot has not changed - luckily! It still shines in the same orange as the previous version and the details are unchanged. The cloth wrapped around the grip, the wood texture and the small screws provide the right look for which we love the edgy Hammershot. On the accessory rail, sights such as the Nerf Modulus Red Dot can be attached. If you do not have a fitting Blasterparts SX holster, you can attach a clip or a strap the blaster to the eyelet on the handle.

5 Zombie Strike Darts are included. Of course, the Hammershot can also be loaded with darts of other Nerf series.

verified purchase
This is a great Nerf, can be easily handeled with one hand, I was pleased with the *** performance wich is, in my opinion, pretty powerful. Good to know, the trigger is sensitive, be careful when it's ready to ***, but it's not a flaw. Love this blaster.
Alexis - 28.04.2020

verified purchase
Best oneshot-blaster ever (except for the grip).
Gregory - 12.02.2020

verified purchase
Funny pistol, love that you can replace parts on this one
Lars - 01.02.2019
Rate the product
You have to be logged in to comment or review products!
back to top
×
×