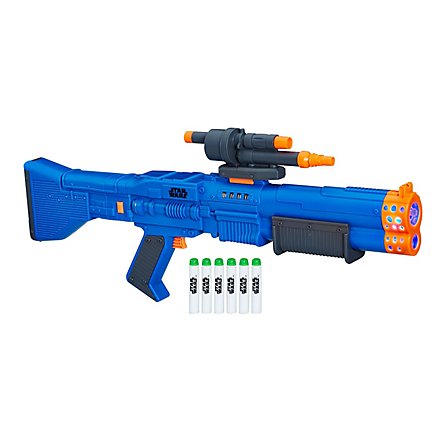 With this blaster, you'll shoot like a young Wookie.

The Star Wars Chewbacca Blaster is not only a great spring-loaded Blaster that makes Star Wars fans happy just by looking at it, it also comes with tons of great features! The built-in GlowStrike technology makes this Blaster capable of charging and shooting glow-in-the-dark darts. In addition to this light effect, the Blaster also features sound effects.

This spring-loaded Blaster shoots two darts at once, which are loaded from the front into its two barrels. After the Blaster has been primed over the pump grip under the barrel, both darts can be fired with a pull of the trigger.

verified purchase
Great
James - 29.09.2019
Rate the product
You have to be logged in to comment or review products!
back to top