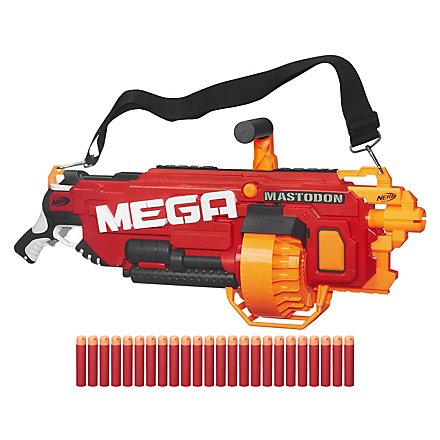 The first full-auto blaster of the Nerf Mega Series!

The return of a prehistoric giant

Huge, red and strong: We are not talking of Hellboy, even if the description  matches accurately. But instead of "Big Red" this Nerf Mega Blaster is decorated with an equally appropriate name: Mastodon.

Because of its size, weight and power, this monstrosity carries the name of the primeval relative of mammoths quite rightly.

Easy from the hip for added style points

Clearly: This blaster is more for the "Heavy Gunner" among the Nerf-friends. Fully assembled, loaded and equipped with 6 D batteries, the Nerf Mega Mastodon weighs about 4kg and its height of about 35cm makes it as handy as using a jackhammer to peel eggshells.

To master the mass of the Mastodon, Hasbro has not only equipped the Blaster with a movable carrying handle, but also included a 2-point sling to allow convenient use from the hip. The belt is also very handy to have one hand free to relaod the open-faced drum. This way, the Mastodon is quickly reloaded with Mega darts in the fray of battle, which is quite important because the drum holding 24 Darts empties very quickly: Full-auto is just too much fun!

Speaking about technology and performance, the parallels to the extinct Mastodon end, because with the Nerf Mega Mastodon everything is State of the Art: the full-auto mechanism works quickly and quietly and sends true mega dart showers onto the battlefield. The range of up to 23m has already been tested on Youtube. On medium distances, the concave-shaped flywheels give the Mega Darts astonishingly high accuracy.