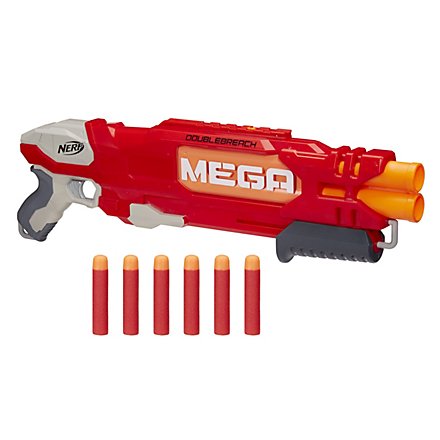 The right blaster for all shotgun fans, that value a good appearance.

Pump Action fans watch out: In addition to the popular Rotofury, there is now another MEGA shotgun in town.

The Nerf MEGA Doublebreach with its intimidating appearance makes an impression. It may not be very effective with her two shots at the size, but she makes it up with style. What's especially unique about the Doublebreach is the way it is loaded.

To load the blaster with two darts, a loading window is built in the left part of the shell of the blaster. Through the loading window, the two barrels can be loaded internally. This is, of course, much more stylish than loading the barrels from the front. Another style plus: the darts stay hidden inside the blaster and do not pop out of the barrels like in front loaders.

As soon as the blaster has been loaded and primed, it is ready to deliver a thick MEGA dart to its receiver. For the second dart, you just have to prime it again using the comfortable Shotgun grip.

The blaster can not shoot two darts at once, but it has Slam Fire, so the two darts can be shot in quick succession. The trigger must be pressed during the priming. As soon as the pump handle is in the forward position, the shot is released.