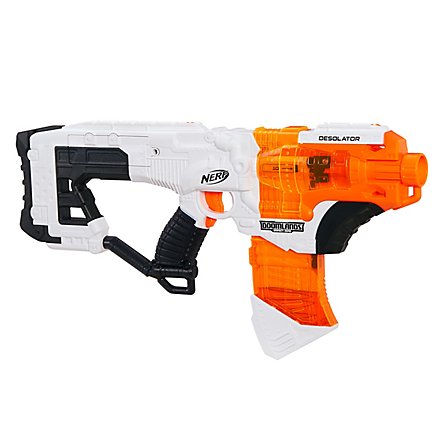 Ice Age in the Post Apocalypse? Impact Zone makes the temperature drop in the DoomLands!

A meteor crash is to blame that the DoomLands have turned ice-cold. But even more, the meteor had alien spores inside it that now turn ash into dangerous monsters. But a hero can cope with new threads when he has new blasters ready!

The Nerf DoomLands Impact Zone Desolator: Futuristic and post-apocalyptic at the same time

The Nerf DoomLands Impact Zone Desolator is a classic semi-auto flywheel blaster in a nice shell that combines futuristic prototype looks with post-apocalyptic feel. The shape is quite sci-fi compatible while the details like screws, bolts and vents make it unmistakingly a blaster of the Nerf DoomLands series.

A see-through window allows the view inside the blaster so that you can make sure you still have darts left to fight ash monsters.

Additionally, Hasbro gave the Desolator a new orange-transparent 10 dart magazine, which suits the blaster very nicely due to the slight curve and the new bottom design.

Not only beautiful, also comfortable

The blaster's design is also well made in terms of usability: the stock and hand grips are well-dimensioned and the short distances between trigger, rev switch and mag release button promise quick and comfortable operation. Two well positioned sling attachment points and two Tactical Rails for separate attachments complete the feature list.

show more
show less
Product details
Warning: Not suitable for children under the age of three. Warning: Do not aim at eyes or face. To avoid injury: Only use original darts. Other darts may not meet safety standards. Do not modify darts or dart blaster.
More from NERF Doomlands 2169
NERF Doomlands 2169
Refill 30 Impact Zone Darts
7,95 € -14%
NERF Doomlands 2169
Dartblaster Doomlands 2169 Double-Dealer
29,95 € 34,95 €
Rate the product
You have to be logged in to comment or review products!
back to top