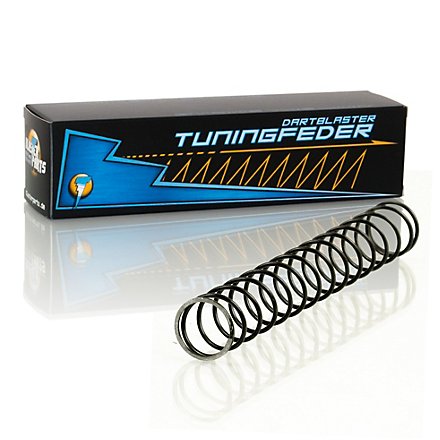 The upgrade for the RaptorStrike you've been waiting for!

The AccuStrike blasters are not only popular because of their design, but also because of their precision, when you use them with the special AccuStrike darts. However, due to the higher weight of the darts, the range is less compared to standard Elite darts.

The Blasterparts Modification Spring compensates for this disadvantage. After the upgrade, you can expect the usual 20 metre Nerf Elite ranges - with the same precision as before.

The installation we would assess as easy to moderate. Anyone who has ever modified a magazine-fed blaster will find it easy to cope. If you are new to blaster modding, you should get an overview of the mechanics after opening the blaster. A few detail photos, where the different parts sit and how they belong together help to reassemble the blaster in the end, in case a piece jumps out.

Hint: Once you've removed the main spring, you can test the mechanics on the open blaster to see exactly how the blaster works. This explains very quickly which part belongs where.

To open the blaster, the cocking handle must be removed first. Well-applied force is required for this. It works best with a carpenter's hammer as a lever, but also a flat-head screwdriver works. In both cases you should put something underneath the lever to avoid scratches and dents.

Two things to look out for in the RaptorStrike:

The spring must be pushed down to the very bottom of the plunger head (the part of the piston with the O-ring). So make sure that it is really flush.

Quite Nerf atypical, one safety lock is placed in the shell part with the screws. This makes closing the blaster a bit tricky. The lock does not have spring, but hangs down loosely. In order to put both halves together again, you have to offset them slightly in the direction of shoulder stock and then push them slightly in position. So from the shoulder stock to the barrel. Then everything should fit together nicely.